Greg Hough is on his way to the Ritz-Carlton hotel in Montreal, Canada, delivering another order of Urban Barns’ lettuce produced in its Cubic Farming system. The lettuce was harvested only three hours ago. Drawing on ideas and concepts used in greenhouse farming, vertical farming, and traditional field farming, Urban Barns’ patent-pending Cubic Farming system reconceptualizes the future of urban farming. “I certainly believe this is the way of the future,” says Hough, head of business development and a jack-of-all-trades with Urban Barns. “We certainly have some aspect of a vertical farm, but I like to think we use space even more efficiently and effectively.”

Urban Barns is using a new farming technology dubbed controlled environment agriculture, or CEA. There are no traditional crop rows and no ladders inside an Urban Barns facility. Rather, long metal frames carrying growing trays are suspended in the air, circulating underneath thousands of red, amber, and blue LED lights. In a sporadically sunny region like Canada, sunlight poses a major impediment to year-round farming ventures. Urban Barns’ hydroponic lettuce, however, suns itself for twelve to sixteen hours each day, using both ceiling-mounted LED lights and intra-canopy LED lights. With traditional farming methods, it can take anywhere from forty-five to ninety days to grow lettuce in the region. Urban Barns’ method has cut the process down to twenty-one days.

Cubic Farming technology doesn’t just present a new way to get from seed to table; it offers an entirely unique product as well. The Urban Barn facility is a completely controlled environment. Instead of overalls and work boots, employees don lab coats, hairnets, and gloves. As a result, Urban Barns does not need to use any herbicides, pesticides, or fungicides on its plants. With many consumers opting for organics in recent years, this creates a competitive advantage. Hough recalls a recent Canadian study in which fifty percent of the organic produce that was tested came back positive for pesticide residue. Urban Barns’ lettuce would probably come back completely negative.

From a production standpoint, Urban Barns’ has cut both time and labor costs dramatically. “Due to the conveyor system, one person can do seeding, planting, and harvesting without really having to move,” Says Hough. Currently, Urban Barns employees less than ten people including its executive team. The conveyor carries the metal trays right to the employee, as a gentle breeze travels throughout the barn. Fans connected to the enclosure provide just the right amount of wind to mirror some of the environmental stresses that the plants would encounter in nature. In the wild, plants have to combat many environmental stresses, like pests, drought, floods, and wind. They become stronger in response to these stresses, leading to healthier and more robust plants.

The cost production aspects of cubic farming are lower than many people would imagine. “Our system uses ninety-six percent less water than a traditional farm would use, so our water costs are extremely low,” says Hough. The most expensive part of the operation is the machinery. “We had nothing to model it after, so we had to design, build, and optimize our machinery from scratch,” says Hough. The company currently uses fourth generation machines to carry the lettuce, microgreens, and other produce along the conveyor belt system. According to Hough, these machines cost roughly $125,000.” Although the company uses thousands of LED lights, electricity accounts for less than one-fifth of total production costs.

The LED lights are a critical component of cubic farming technology. “If you look at our Urban Barn now, you will see a pinkish and purple-ish hue emanating from it.” This color is no accident. Urban Barns has worked closely with researchers at McGill University’s Bioresource Engineering program, including Dr. Mark Lefsred, who helped NASA figure out how to feed astronauts fresh vegetables in space. McGill has helped Urban Barns develop many aspects of cubic farming technology, including the precise tone and hue of each LED light. The color of the light makes a difference in the growing process, which, according to Hough, you can taste.

Urban Barns has many items on its technological advancement agenda. In hydroponic farming, crops are seeded and grown in plugs made from a fabric-like material commonly referred to as substrate. Currently, the company is exploring the use of alternatives to the rockwool substrate it uses to grow its lettuce and microgreens. McGill researchers have tested a wide variety of potential substrate substitutes, including hemp fiber and coconut fiber.

Right now, a number of Urban Barns’ microgreens are growing in the newly developed hemp fiber. The material is actually cheaper than rockwool, and provides a major bonus benefit for the company. “Substrates don’t break down, but these fibers will,” says Hough. For the company, sustainability and environmental stewardship are a top priority. Finding a cheaper and more sustainable alternative to traditional substrates would be a landmark success for Urban Barns as well as the larger hydroponic farming industry.

The company sees itself growing in the coming years and intends to venture into other types of produce. Hough is particularly interested in produce that cannot be grown year-round in the chilly Canadian climate, like fresh strawberries in winter. Urban Barns chose lettuce as its first crop in order to provide local residents with fresher alternatives to the imported lettuce on Canadian supermarket shelves. Most of Canada’s lettuce comes from California, taking seven days to travel across the continent and another two to three days to hit store shelves. The company also sees its geographical reach expanding. “The plan is to have a barn in every major city across North America,” says Hough.

These goals are not without impediments. Hough sees two potentially significant hurdles to bringing Cubic Farming technology to the forefront of the market. Consumer education has proved to be a challenging task for many of Urban Barns’ endeavors. Currently, the company sells its lettuce in single-serving heads priced at the upper end of the organic produce market. “The education process is attached to the premium that we are charging now,” remarks Hough, “but our product has a lot more to offer.” Current clientele include many upper-end hotels in the area, like The Fairmont and Hyatt, in addition to many grocers throughout the region, including IGA, the largest grocer in Canada.

Competition poses the second hurled for the company. Urban Barns has identified at least two other operations using a similar LED light system, including a vertical farm on Canada’s eastern coast. “I believe it is going to be a first-to-market race,” remarks Hough.

Urban Barns’ aspirations of building Cubic Farming barns across the globe are tethered by a concept that is very important to the company. “We definitely have aspirations of becoming a global company, but we always want to maintain local roots.” The local food movement has gained popularity in recent years, and has drawn in many consumers who enjoy supporting local agriculture while receiving the freshest produce possible. “The current food system is not optimal,” says Hough. “This is the future. There is no question in my mind about it” 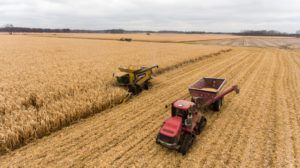 Restaurant tech is serving up funding deals mid-pandemic – but will adoption stick?