Indigo Agriculture, the agtech startup best known for plant microbiome technology — and raising a cool $403 million in four years — is making a bid to become an agtech product distributor and digital platform.

Indigo manufactures cotton, corn, wheat, soybean and rice seeds coated in a casing of beneficial microbes to help withstand stressors such as heat and drought and use fewer chemicals. The company buys that crop back from farmers for a premium based on its sustainability credentials.

But the company is expanding its offering into new domains, and at the end of the year it is launching Indigo Insight, a digital product offering precision agriculture decision support for agronomists and advisors, Barry Knight, Indigo’s head of commercial operations for North America, and head of the Indigo Research Partners Program, revealed to AgFunderNews.

The startup is also set to start distributing chosen agtech startups to its farmer clients as part of its existing microbe-coated seed package at some point. This will provide startups with immediate market access to Indigo’s client base, which now spans over 500,000 acres. It will also provide Indigo with a wealth of data on the efficacy of various agtech products globally, as well as tap their data streams into Indigo Insight.

Indigo is rolling out the platform via its research initiative Indigo Research Partners, a collaboration between Indigo and 50 large US growers initially launched in 2017 to research Indigo’s microbial products and give farmers information about their efficacy in different environments, conditions and crop types. Indigo has expanded the scope of the program to test third-party digital and biological ag startup technologies across Indigo Research Partners’ 25,000 dedicated acres, as well as collecting production data from those farmers’ 500,000 acres in total in what the company is calling the “world’s largest agricultural lab.”

“Our goal is not to endorse technologies, but to understand what value they bring and find those that can bring farmers enhanced profitability; if a product we trial brings value, we will incorporate it into one of our systems on the commercial side,” said Knight. “For example, in wheat, we could start providing farmers with the seed, the microbes, and a sensor-based technology that will turn an irrigator on and off and use the right amount of water.”

Indigo is currently trialing five different technologies with more than 15 startups and gathering 129 different data streams — such as soil temperature and moisture at different depths, humidity, wind speed — but the startup is understood to be speaking to several more startups about joining the initiative.

“Indigo is speaking to over half of my portfolio about becoming a distribution partner,” said one leading agrifood tech venture capitalist who did not want to be named. “Indigo could be a future marketplace for sustainable and biological ag inputs, which could impact my portfolio in a positive way.”

Indigo, which is focused on increasing the sustainability and traceability of agriculture, says it hopes to alleviate pain points for both startups and growers with this initiative. For growers, the challenge lies in working out what exactly underpins a good yield as well as evaluating the many different technologies on the market, writes Geoffrey von Maltzahn, founder and chief innovation officer in a blog post published today.

“There’s no gold standard by which to evaluate new technologies in agriculture. Companies release their own data, which is neither standardized nor formally judged, and growers are left to sort through it, deciding what (if anything) they might believe. In this confusion, it’s often easiest and least expensive for growers to stick with what they know — with what they’ve been using on their farm for years. The consequences of this are profound: instead of all input decisions being driven by data, they are largely driven by marketing, brand, and power. This makes life harder for farmers and creates barriers to entry for new innovations, slowing the pace at which the industry can adapt to modern consumer and environmental needs.”

Indigo also noticed that many startups struggle to access farmers and get their products on the farm. This limits the research they have to back their wares and their potential pool of customers.

“Many of our commercial microbial products out today are from other companies that didn’t have the wherewithal to get in front of customers,” said Knight. (Indigo CEO David Perry admitted to AgFunderNews previously that some of its microbial technology was developed externally and licensed in.)

“One startup we’re trialing is raising $2 million of which 90% is set to be used on R&D, but by working with us, they can reduce that greatly and get much more market exposure as we can put them right into our network so they do not need to hire people for all the infrastructure to get that done; we believe this is a very efficient way to test things around the world,” Knight told AgFunderNews.

Through this distribution, Indigo is effectively creating a new channel for farmers to purchase their inputs, moving in line with the growing trend for online marketplaces.

“What they’re proposing is a pretty valuable service,” said Mark Kahn, founder of Omnivore Partners, one of agtech’s longest-standing venture capital firms. “It effectively becomes plug and play for startups that need scientific validation. Given that what this company seems to do best is raise capital and bring on board incredibly talented people, they have the ability to fund, support or acquire other startups and all of a sudden you have the makings of another big ag player — a plus one to the big four agrochemical players focused on the next generation of technologies as opposed to legacy technologies.”

Indigo has always stated its intention to build a stand-alone business with plans to IPO in a few years. Looking at the value Monsanto’s digital acquisitions drove to its share price and ultimate purchase price by Bayer, creating a digital platform is a smart move for Indigo, adds Kahn.

“In theory, this could be tremendously rewarding as Bayer paid far more for Monsanto’s digital platform than they spent on it in the first place. Plus, Indigo stands to create a more rounded out company that’s not just a one trick biotech pony.”

Some industry VCs questioned whether startups would be willing to share their valuable data with Indigo in return for distribution, which will take a while to reach the heights of existing channels.

“Startups need to figure out distribution faster than the incumbents can figure out the technology, so clearly new distribution channels will be important for industry disruption,” said Rob Leclerc, CEO of AgFunder, the agrifood industry’s online venture capital platform. “However, data is a moat for most startups so if Indigo is too aggressive coveting data, they risk only attracting second tier agtech companies; this would send a negative signal to the market and investors. Startups will have to think carefully if the distribution is worth the risk.”

There is also a huge amount of execution risk to Indigo’s whole business plan, with sources saying that the premium price Indigo offers its farmers for their sustainable crop is not being met by buyers.

“It’s an audacious goal to essentially buy market share by offering a premium, but there’s logic to it, particularly with Indigo’s exceptional access to capital that could mean they survive pressure from a bad crop year,” said an agrifood tech VC that did not want to be named. “It’s divisive in the industry, with traditional ag players believing this is an accident waiting to happen, but if they pull this [marketplace] off, they could be truly disruptive to the industry.”

Indigo plans to expand Indigo Research Partners’ network to 100 growers by the end of the year and will be onboarding wheat farmers this fall and more spring crop growers next spring, according to a spokesperson. The company, which says it projects $500 million in booked revenue by the year-end, is also looking at expanding Indigo Research Partners to Australia and South America where it already has offices, according to Knight.

“We are developing a new approach to agricultural R&D that will enable data-based decisions and promote continuous improvement across technologies,” said David Perry, Indigo’s President and CEO in a statement. “Ultimately, Indigo Research Partners will serve as an open-source data platform for all growers, delivering insights that can improve the profitability and sustainability of their farms.” 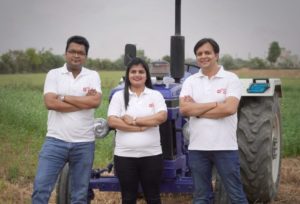