How to Encourage the Adoption of Agtech Innovation in India

An estimated 450 million¹ of the population in India depends on farming for their livelihood. Agriculture in India makes for an interesting study with the farmer at the epicenter.

An interesting phenomenon of Indian agriculture is that it’s increasingly feminized with more women working in the fields while menfolk migrate to urban areas seeking alternate employment. Despite the increasing contribution of women to farming, few women have titles to the agricultural land in their name.

Landholdings are small and getting smaller. The average size of farmland holdings in India is also falling on account of the division of landholdings among siblings in each generation. Average holdings are currently around 1.2 hectares (3 miles) and widely expected to drop to one hectare or less. In fact, nearly 50% of Indian farmers have land holdings of less than half a hectare.

The Indian farmer has subsistence income and is heavily in debt. The average monthly income of the Indian farmer is a mere Rs6,400 ($100). An estimated 50% share of the income is from farming and animal husbandry (mostly cattle) while non-farming activities account for the rest. This income barely meets household expenses and leaves little for savings or investment in new farming techniques. Indian farmers on average have loans of over Rs47,000 ($700). Unsurprisingly, over 50% of Indian farmers are in debt, and a mere 10% have crop insurance cover.

Farming is not the preferred option to earn a living. Most Indian farmers inherited the farm from their ancestors. A significant one-third of farmers, according to various farmer surveys, are willing to quit farming if presented with alternate employment.

In this scenario, understandably, the farmer has limited ownerships of farming assets such as machinery. The penetration of tractors in India remains well below 10% — by comparison, the adoption of mobile telephones has surpassed 50% — and most small and marginal farmers lease land from larger farmers.

The Indian farmer requires assistance on several fronts including policy reform, infrastructure development, institutional financing and, more importantly, innovation to address some of their key challenges.

How Will Innovation Benefit Indian Farmers? Will Farmers Pay for Innovations?

Agtech innovations can increase farmer incomes by improving the efficiency of farm operations, reducing costs, and de-risking farming considerably in the following ways:

Five agtech innovations that have the potential to collectively and comprehensively achieve the above are: Each innovation in Figure 1 addresses at least three pain-points for Indian farmers. Indian farmers have time and again demonstrated an eagerness to set aside convention and adopt new practices, as demonstrated by the following three key developments in Indian agriculture in the past decade.

Figure 2: Schematic of a Farmer’s Working Capital Requirement During the Year

As demonstrated in Figure 2, in the case of food grains, farmers enjoy liquidity only twice a year – at harvest time of Rabi (April-May) and Kharif crops (October-November) respectively. Horticultural crops (read vegetables) offer more frequent liquidity due to the short lifespan of those crops. Animal husbandry (read dairy) offers the best liquidity of all because surplus milk is sold for cash daily with winter months yielding better than summer due to the availability of better fodder resulting in higher milk output. Both horticulture and animal husbandry have demonstrated significant easing of working capital requirements for farmers and this has promoted the higher adoption rate of these farming activities.

Given the cash-strapped financial status of the farmer, the cost of the innovation will need to be financed by other constituents in the supply chain. The likely buyers of agtech innovations who stand to gain from it, and are therefore willing to finance the costs, are mapped in Figure 3.

Farmers have demonstrated willingness to pay for innovations that have immediate tangible benefits; be it hiring of implements or farm produce aggregation for a better price and higher income through diversification.

This also implies that entrepreneurs working on agtech innovations must prepare themselves for sales through a B2B business model for the initial period of sustenance.

Four Recommendations to Facilitate the Adoption of New Innovations by Farmers

In conclusion, there needs to be a concentrated effort from investors and innovators to develop and deploy innovation to make farming an aspirational profession in India.

As Will Rodgers wisely said, “The farmer has to be an optimist, or s(he) wouldn’t still be a farmer.”

¹The population in India is an estimated 1,326,801,576. Of the over 167 million rural households in India, approx. 90 million households are engaged in farming. The average farming family has five members, thereby near 450 million people directly dependent on farming. 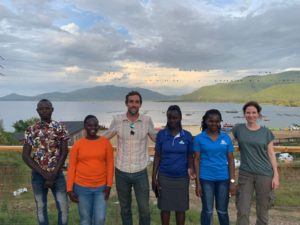