The startup is on a mission to repurpose the 20 billion pounds of produce that are wasted at the farm level each year.

Startups focused on food waste have raised over $150 million in the last three years, according to AgFunder data. There was a slight increase to $133.7 million in 2016 compared to 2015, when they raised around $100 million, according to AgFunder’s 2016 AgTech Investing Report. The 23 technologies that raised funding included e-commerce platforms like Full Harvest, that aim to reduce food waste by selling unwanted but perfectly edible produce, as well as waste repurposing, and shelf-life enhancement technologies.

Tapping the experience of technologists with food and logistics experience, Full Harvest applies proprietary technology and a new supply chain model to try and change how the food industry manages imperfect produce, which includes all the fruits and vegetables that are considered too flawed for supermarket shelves.

With the global fruit and vegetable ingredients market projected to grow to $180 billion by 2019, the company is positioning itself to lead the produce industry into what it describes as a “waste-free future.”

“I worked in the logistics and food industry for about 12 years, and through that I saw a lot of waste,” Full Harvest CEO Christine Moseley tells AgFunderNews. “I started doing research and read all these food waste reports and was shocked that no one was talking about it. When I visited farms, I saw this massive amount of waste left in the field.”

The reason for the staggering amount of produce left in the field isn’t carelessness. It’s the result of no clear logistics and distribution chain connecting farmers to food companies that don’t care what the produce looks like.

“The metaphor I use is to imagine Airbnb wasn’t a platform—just people calling randomly about vacancies. It’s not scalable, but that’s the way it works right now for produce seconds,” explains Moseley. “What incentive do farmers have spending time on the phone calling around trying to move this product that they won’t be paid as much for?”

In addition to creating an online platform that allows farmers and food companies to find one another, Full Harvest also handles all the logistics. They are constantly working to improve their role as the digital distributor. So far, many buyers are in the habit of making weekly purchases, particularly enjoying the freshness and quick delivery, says Moseley.

Many companies also like the opportunity to show consumers that they are making an effort to fight food waste, an issue that is gaining noticeable traction at the supermarket checkout.

“I tell my customers that they have the ability and buying power to help solve food waste. They can create an incentive for farmers to harvest and sell produce that would otherwise be left in the field and wasted,” says Moseley. “Organic is on trend, but the next trend will be around sustainable supply chain.”

Full Harvest plans to use the new round of funding to expand its market reach throughout key markets. Currently, most of its farm suppliers are located on the West Coast. The company is planning expansions into South America and Central America. Its purchasers are located primarily on the West Coast, with plans to expand into Texas, Colorado, and the Midwest. It also plans to expand its team and is rolling out an online payment feature.

As for the recent raise, Moseley says she made networking a priority and aimed for a good mix of investors, including investors with experience in the food and ag sectors.

“I hyper-focused on people who understood what we are trying to build. We have some strong angel investors, some great impact investors, food and ag investors, and then we have fantastic tech investors,” she explains. “I was very picky and specific and brought people from across the supply chain.”

She also describes the fundraising climate in the San Francisco during last six to eight months as fraught with change and relatively bearish.

“A lot of people were super impressed that I could raise during that time-period. But, just like any seed round or Series A, it does take time, and it’s a lot of work.”

But, while some entrepreneurs would see an increasingly crowded space as competition, Moseley points out that there are enough opportunities for food waste innovation along the food chain to support the growth.

“We are all executing completely different ways of addressing food waste, which shows that there is a lot to do in the supply chain. I also think the other entrepreneurs would agree that this is an emergency; we are killing our planet, people are going hungry, and we are wasting food. It’s unacceptable.”

Considering the challenges that the battle against food waste faces, perhaps the more entrepreneurs the merrier. In her view, consolidation in the supermarket sector concentrates buying power among a few companies and the lack of infrastructure to support a steady market for produce seconds are just two examples of areas ripe for disruption.

“The technology has been lacking, and it’s really needed. In the last couple years, it has exploded in the ag, tech, and food worlds in terms of investing. There is no way one and a half years ago that I could have raised money. Investors didn’t think it offered opportunities for scalable solutions,” she says. “It had to become a topic of interest.” 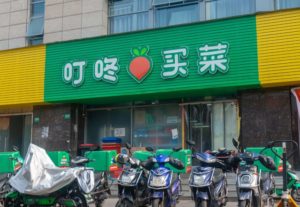