To many, China is seen as a very opaque market that is hard to do business in as a foreigner. Understanding its agriculture sector, its needs and developments, is possibly even harder, so foreign agribusinesses and tech providers have often struggled to penetrate the market. But where there’s a will, there’s a way, as Manuela Zoninsein can attest to.

Zoninsein is founder of Smart Agriculture Analytics (SAA), an English language data and intelligence provider for China’s agriculture technology market, which she launched seven years ago from her dorm room at Tsinghua University in Beijing.

Starting life as a news aggregation service, and last year launching a data service, SAA has this week re-shaped its business to provide what is essentially a matchmaking service for overseas technology and input companies, and Chinese agribusinesses and distributors, in the livestock and feed industries.

“The data we were providing helped tech providers globally from Israel to Australia and so on, discover who their customers should be, enabling them to build a sales strategy dependent on, and determined by, the needs of Chinese farm operators,” says Zoninsein. “But after speaking to our clients, we understood that it’s not enough to know information about their customers; they want to connect with them, and that’s where we came to accelerate our business model.”

SAA will now move away from predictive sales and analytics data, and instead, under the new platform, help its clients and subscriber base — historically non-Chinese tech providers — to connect with Chinese distributors, capable of importing tech, distributing it and reselling it. Finding relevant and trustworthy partners for her oversea’s clients is key to Zoninsein’s mission.

“We feel very confident that we know who and where demand is coming from and who the most active players are after two-and-a-half years collecting data,” she says. “We not only know where to get data on reliable distributors, but we have an initial sense and network of distributors who are suitable and qualified to work with non-Chinese tech providers.”

In order to focus on this new platform model, Zoninsein has recently downsized the team at SAA from 14 to 5.

“What we’re working on now is less on content services, where most of the talent was in the past, but really focusing on people with great expertise in distribution networks, as well as sales experience in agtech and agri inputs,” she says.

Data is still a keen component for SAA and has been collected from three main sources: a large number of dedicated agriculture news sources, which the company pulls in through a mix of automation and human selection; partnerships with China’s agribusiness intelligence space; and the Chinese government, both local and national, through partnerships and purchases.

The data come in the form of information about subsidies and regulations, recent market transactions, mergers, acquisitions and investments, intel about new local trends in agriculture, and a layer of climate and weather data.

“The news aggregation in itself is very useful, especially considering China is a very decentralized system despite what people think,” she says.

In fact, Zoninsein started her life in China, eight years ago, as a journalist for Newsweek and Engineering News Record.

“I have always been passionate about food and agriculture since I got to work at the Chicago Board of Trade on the commodities floor at the age of 18,” she says. “And after watching the Chinese government invest trillions of dollars into the sector when I moved here eight years ago, I really wanted to cover agriculture and agtech.”

Her motivation moved onto launching SAA when, as a journalist, she noticed how big the lack of viable data and information for the sector was.

Born in the natural resource hub of Brazil and brought up in MidWest U.S., it was easy to become fascinated with China, according to Zoninsein, who learned the language after taking a masters at the University of Oxford on Modern Chinese Studies — focused on China’s agricultural policy system — and winning an intensive Mandarin fellowship at Tsinghua University.

In summing up SAA’s new direction, or “accelerated business model”, as Zoninsein puts it, she shares an anecdote from a meeting with a Spanish seed dealer. “He told me that he has been coming to China for six years and has spent the last three meeting and vetting distributors,” she says. “The service we’re now offering is designed to save providers of tech and inputs months of time time so they can focus on actually growing their businesses.”

Have any news, tips or want to write a guest post? Email [email protected] 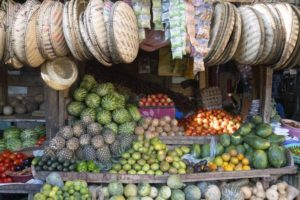