Amerra bought the stake from Global Finance, a Greek investment management firm, which saw the company grow from a €30 million family-owned company to a €100 million company, according to a press release.

The aquaculture and seafood industries are slowing creeping onto investors’ radars, and the number of investments in technology and production are increasing.

Last month, aquaculture sensor startup The Yield closed a $2.5 million investment led by global technology company Bosch Group, while in January, Catalina Sea Ranch, which is establishing the first offshore shellfish ranch in US federal waters, raised $1.5 million in seed funding. Plans are also moving forward in the construction of one the world’s biggest aquaculture facilities in Iowa, which several investors are understood to be circling.

Tom Frese, president of AquaSol, a fish farming consultancy, noted that investor interest in the aquaculture industry has accelerated in recent years, and the company’s relationships with qualified investors has grown from just a few to around 20.

“Several of these investors have billions of assets under management, so we are talking about some serious players here. While some of these prospective investors are strategic players and have a good understanding of the aquaculture industry, many are not,” he told AgFunderNews. “These financial investors are attracted to the space by the incredible macro story behind aquaculture.”

Monica Jain, the founder of Fish 2.0, a biennial business competition event dedicated to supporting innovation in seafood and aquaculture, said she has seen strong and continued growth in the sector over the past four years.

“Investors are seeking to learn more about the sector and to find opportunities in vertically integrated, growing businesses in the sector,” she told AgFunderNews. “The seafood sector is characterized by fragmentation at every level, regarding supply chains, industry knowledge, and connections among the players. This makes it difficult for new investors to learn quickly about the tremendous opportunities in seafood.”

To help grow the market, Fish 2.0 brings investors and entrepreneurs together at the event with the hope of building a broad network and educating new investors.

Some three billion people worldwide rely on seafood as their major source of protein. But with a stagnant global wild fish supply and increasing global population, demand will not be met unless farmed fish and shellfish production increases by 133 percent before 2050.

“The world’s oceans and inland waters are largely fished to their limit, and the supply of wild-caught fish peaked in the 1990s,” wrote Richard Waite, an associate at WRI, and lead author of the report. “Aquaculture is growing quickly to meet world fish demand, and already produces nearly half of the fish we eat today. Because farmed fish convert feed to edible food efficiently, aquaculture could provide food and employment to millions more people than today, at relatively low environmental cost.”

Global fish populations could double if all countries switched to best management practices, however, according to a recent study published in the Proceedings of the National Academy of Sciences.

Are you considering investing in the aquaculture sector? Get in touch on louisa@agfunder.com. 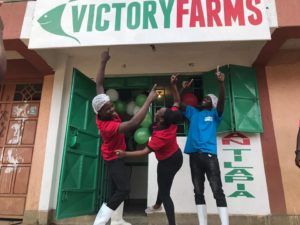