The global food system is changing in a few key ways. Chief among them is increasing consumer demand for more information about where their food comes from. As a farmer producing pasture-raised, grass-finished beef, lamb, and goat meat for direct-to-consumer sales, I see it happening every day. The demand extends to more than just full disclosure in the ingredients list. Consumers want to know about sourcing, manufacturing, animal welfare, shipping, child labor, and brand ethos.

As consumers hope to lift the curtain separating them from food production, food companies are starting to use buzzwords like “transparency” and “traceability” with increasing regularity. I can’t help but wonder what’s stopping them from strategically orchestrating exactly what consumers do or don’t see like a puppeteer perched above the curtain? Where do we draw a line between profit-driven greenwashing and honest-to-goodness transparency?

This question presented itself squarely to me last month when Vital Farms announced what it describes as a “groundbreaking food traceability program” that allows consumers to “see the small family farm – with 360° video footage – where their eggs were laid, with the click of a button.” A farm name is printed on the side of each carton. Users can enter the farm name and this website and review the footage.

I was curious to learn more about this program, which offers not only traceability but transparency about what’s happening on its contract growers’ farms. Vital Farms contracts with about 200 egg-producers located in the so-called pasture belt, encompassing an area located roughly between the Northeastern edge of Texas to the Eastern Seaboard.

What immediately caught my attention was that the footage is only updated twice a year. It is incredibly easy to portray my farm in different lights depending on where I film, the angles used, the weather, the season, and more importantly, by what I choose not to include in the frame. I am confronted with this on a daily basis, sharing consumer education-driven content about my farm through my Instagram account.

“Because we look out for the well-being of all our stakeholders, this program takes into account everything from available technology to farmer privacy while ensuring our consumers get to see where their eggs come from,” Vital Farms wrote via email. “Updating the footage twice a year gives us the chance to showcase different aspects of our farms and their pastures.” The company declined a request for a phone interview to discuss its new offering and provided written responses to questions that were reviewed by its legal team.

If you look at the footage on Vital Farms’ website, you’ll see chickens scratching in plentiful pasture, often with abundant sunshine and the claim that its hens “nosh on native grasses year-round.” But as someone who also farms in this so-called Pasture Belt (Northwest Arkansas to be exact), I can tell you that farmers in this region are contending with something quite different in late February.

As I write this, the view from my window is grass stubble, mud, and standing water with snow in the forecast. The growing season slows down significantly around November and doesn’t pick up again until mid-March. Perhaps Vital Farms’ contract growers stockpile forage to use during these months but I have questions about whether the birds would do well outdoors in our winter climate.

Forage availability aside, the videos could also mislead the consumer when it comes to the type of operation Vital Farms runs. Vital Farms’ birds are raised in stationary houses that have an open door giving them access to the outdoors. Multiple sources have told me that most chickens raised in stationary houses rarely, if ever, venture outdoors, regardless of the forecast. I couldn’t see any houses in the videos I watched, although Vital Farms assured me they’re in the background of some and in images on their website.

This may sound trivial, but stationary barns are at the heart of a big debate in the pastured poultry industry. Afterall, Vital Farms brands their egg products as pasture-raised. Is that really true if the vast majority of the laying hens spend little time outside their barn? When asked whether Vital Farms’ birds are outside during winter, the company responded, “Yes, our girls have outdoor access year-round.”

Paul Greives, founder of Southern California-based PastureBird, has been outspoken when it comes to drawing a line between poultry operations using stationary barns versus the system he uses: mobile coops moved to fresh pasture each day. According to him, Vital Farms’ new program is more misleading than transparent.

“Say I give my 3-year-old ‘access to’ kale or candy, her choice. She chooses the candy 90% of the time and kale 10% of the time. Should I claim she was raised on kale?” Greives said to AFN. “Would it be transparent if I showed a bunch of photos of her eating kale, even if she ate candy 90% of the time? But she had access to all the kale she wanted?” The candy Greives is alluding to in this analogy is the grain offered to laying hens inside large-scale houses that have doors providing access to pastures — kale in his analogy — at the birds’ discretion.

“I support all steps towards more real transparency and honesty in the food system. I think the National Chicken Council’s Chicken Check-In program is super great. They’re not shying away from what real chicken production actually looks like. I totally respect this, showing the inside of real chicken houses and telling the truth about what they do,” Greives adds.

The flipside of this traceability debate is that meaningful change takes time. Rome wasn’t built in a day and neither will a radically different food system for animal products.

“I don’t see anybody else making these kinds of moves. It’s 100% more than what other companies are doing so give them some credit for that,” Matt Wadiak, founder and CEO of newly launched poultry producer Cooks Venture. “I respect the effort, I think it’s thoughtful, and it helps drive the industry forward. I bet today if you go to Vital Farms, they will give you a tour instead of a conventional chicken operation that will threaten to sue you.”

Both Pasture Bird and Cooks Venture offer tours and PastureBird has hosted 20,000 people to date. Wadiak says Cooks attempted to put cameras inside the stationary houses that it uses but had issues maintaining a signal. He emphasized the technological prowess that likely went into Vital Farms’ new offering and estimates that it cost the company a pretty penny.

I see his point; baby steps are still steps, and I applaud Vital Farms’ effort to be more transparent. But I have a hard time calling Vital Farms’ new transparency offering groundbreaking. Why not tell the whole truth instead of just the part that makes you look perfect? I would have far more respect for Vital Farms’ effort if they included footage from inside the stationary barns that its contract growers use, chose to update it more than twice a year, or included some photos from any time other than the peak of spring. I have yet to find an example of their birds on pasture in winter. Show me what your farm looks like in the belly of winter and the armpit of summer. That’s more impressive, more educational, and more transparent than showing 20 birds walking through bucolic spring pastures.

And wouldn’t it be more truthful, or at least accurate, for it to describe its hens as having pasture-access instead of being completely pasture-raised? Other farmers and I are concerned that this new offering will mislead consumers into thinking that Vital Farms’ contract growers’ operations look that same way on the other 363 days of the year.

Perhaps part of the reason the consumer-agriculture divide is so vast is that we are too afraid consumers cannot handle what they’ll see if we get rid of the curtain altogether. If we want consumers to have trust in food production again, we have to trust that most of them won’t run screaming if we share the bad along with the good. Sure, some won’t understand, like, or accept what they see.

But I share a lot of my farm via Instagram and the stories that have resonated the most are the ones where I am brutally honest about a dead calf, the devastation of extreme weather, or where the challenges I face. Those are unavoidable realities of raising livestock whether we include them in the frame or not. It’s a disservice to consumers and to this vocation to edit them out for the sake of optics or making an extra dollar.

I’ll be eagerly watching how Vital Farms’ traceability program progresses. In the meantime, I’ll proudly keep showing the general public what my farm looks like during the best of times and, more importantly, the worst of times.

What do you think? What constitutes transparency? Is Vital Farms’ offering enough? Email me lauren@agfunder.com 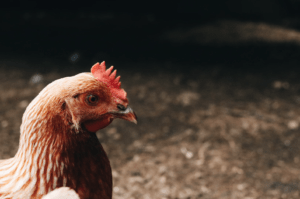