Grocery ecommerce won’t make the big splash that many anticipate over the next five years, according to the latest grocery-focused report from CBRE’s 2019 US Food In Demand research project, but technology will still play a key role in redefining customers’ grocery shopping experience, transforming back-end operations. and providing a much different front-end experience for shoppers.

Supermarket sales totaled $743 billion in 2018, marking a 3.5% jump compared to 2017. Despite the buzz around grocery delivery, consumers are showing a continued preference for picking up their items in-store. During 2018, e-commerce grocery sales totaled $58.9 billion according to IRI, representing a 35.4% increase over 2017.

Although some consumers are becoming more receptive to the idea of ordering food online, many still feel funny about letting a stranger pick out their perishable items, unreliable delivery windows, and a desire to avoid receiving substitute items if their preferred item is out of stock, according to the report. Millennials are the most likely to dabble in online grocery sales, which could forecast major growth for the segment as they transition to head of household and increase their spending power.

But, over the next decade, big players in the supermarket space will begin opting for small-format, convenience-oriented concepts targeting urban locations with heavy foot traffic, the report predicts. Amazon has been piloting the concept with its Amazon Go cashierless stores and plenty of copycats have hopped on the bandwagon.

Prepared foods and meal kits will continue to be a popular concept as consumers are finding less time to spend on shopping, cooking, and cleaning, preferring instead to lean on value-added options. The meal kit space has been rife with competition, turbulence, and casualties. As a result, many companies are making concerted efforts to differentiate and to get their products in supermarkets where it’s easier for curious consumers to take a meal kit home instead of hoping that they sign up for delivery online.

And within the next 10 years, the checkout line will disappear entirely. Retailers including Walmart, Kroger, and Costco have all dabbled in technologies that allow shoppers to scan items as they go in order to expedite their shopping experience. Sam’s Club recently introduced an app-based technology that allows users to merely wave their smartphones over an item to add it to their tab in lieu of scanning the barcode.

Although grocery will likely see steady growth over the next five years by the report’s prediction, non-traditional and specialty formats are expected to flourish. UK-based Sainsbury’s is already conjuring up ideas about what grocery could look like in 2169 and a number of indoor farming startups are seeing opportunities to work with supermarkets and logistics companies.

As the race for more technology in grocery continues, consolidation will become a common trend as the losers may decide to sell in order to stay competitive with the winners like Walmart and Kroger who often have substantial resources to invest in R&D and who can afford to launch tech-focused experiments that may ultimately fizzle.

Food packaging may also transform entirely during the next 10 years, with countless startups already offering solutions for recyclable, compostable, or longer-lasting packaging materials and concepts. TemperPack, which recently closed a $22.5 million Series B, created a patent-pending curbside recycling alternative to expanded polystyrene, while TIPA, which recently closed an $11 million Series B, has created a compostable food packaging that breaks down in 180 days compared to hundreds of years.

Meanwhile, FoodMaven, which recently raised a $10 million bridge financing, and several other startups are creating new marketplaces for high-quality local, oversupplied, and imperfect food that connect grower with restaurants and other buyers.

Supermarkets aren’t the only targets for technological makeovers. Restaurants have seen plenty of digital updates recently thanks to a growing number of startups applying things like AI, machine learning, and automation to dining and takeout. In 2018, startups creating retail and restaurant technologies raised $1.7 billion in funding. 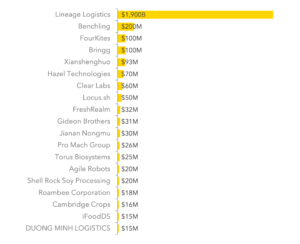