Ripple Foods, a Californian startup producing plant-based milk, has raised $13.6 million in Series A funding from a group of undisclosed venture capital investors.

The company plans to launch its first product in early 2016, Dr Neil Renninger, co-founder of Ripple Foods, revealed to AgFunderNews.

Renninger would not disclose the investor lineup but indicated that some of the “traditional VC sources” involved were already in his network; he and his co-founder Adam Lowry have launched businesses in the past and are familiar with some big name VCs such as Khosla Ventures.

The company, which is still in quasi-stealth mode, joins a growing number of startups looking at ways to manufacture animal-based produce — such as milk, eggs and meat — for human consumption, without needing animals. Muufri is another startup looking specifically at milk and has raised capital from some high-profile investors including Hong Kong billionaire Li Ka-Shing’s Horizon Ventures. Muufri replicates the chemical makeup of milk in the laboratory using yeast.

Ripple Foods’ version is completely plant-based and targeting consumers that are worried about nutrition and sustainability, according to Renninger.

“Adam and I have known each other for a decade or so, and we have both built sustainability companies before,” he said. “We wanted to do something that can add even more impact than those prior businesses, and when we looked around, we were interested in the food space and saw incredible opportunities. So we decided to challenge existing dairy products in terms of taste, mouth feel and better nutrition.”

Renninger, who holds a Doctor of Philosophy degree in Chemical Engineering from the University of California, Berkeley, co-founded Amyris, a biotechnology company that developed technology capable of creating microbial strains to produce artemisinic acid — a precursor of anti-malarial drug artemisinin. After raising various rounds of venture capital funding from firms such as Khosla Ventures and DAG Ventures, Amyris successfully listed on the NASDAQ in 2010.

After Amyris, he focused on developing processes for converting plant sugars into fuels and chemicals as part of a wider mission to combat climate change. “Ripple is an extension of that desire for impact, disrupting an industry that is one of the most significant emitters of greenhouse gasses and utilizers of water,” reads his bio on the Ripple Foods website.

His co-founder Adam Lowry, also has experience with the venture capital industry after co-founding Method Products, an environmentally friendly home cleaning products company, in 2000. Lowry has also worked as a climate scientist at the Carnegie Institution for Science, where he developed software products for the understanding of climate change and serves on the board of AeroFarms, the urban agriculture company. He holds a Bachelor of Science in Chemical Engineering from Stanford University. 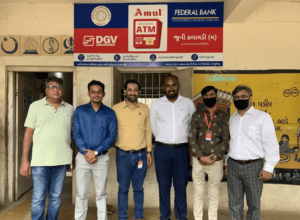