In a country where post-harvest losses are pegged at around 10 percent — and are even higher for fruits and vegetables — improved agricultural infrastructure is in great need in India.

Claiming to reduce post-harvest losses to 0.5 percent using its technology platform AGRI REACH, SLCM offers storage and protection services for agricultural commodities to farmers and other stakeholders from processors and traders to agriculture exchanges, exporters and importers. It does so through its network of more than 760 warehouses and 17 cold storages across the country.

AGRI REACH is SLCM’s defined process of warehouse management across multiple locations and multi-layered operations, which is managed out of SLCM’s corporate office in New Delhi. It is a real time management information system (MIS) aimed at turning around data in less than five minutes. This is done through the use of biometric hand-held devices by audit inspectors. These devices are configured to track and record inventories in the warehouses and communicate the data to clients on a real-time basis through text message.

The device can also facilitate digital signatures to cut down turnaround times and link multi-location operations with central servers over a wireless network. And AGRI REACH includes the online monitoring of cold storage units through temperature and humidity sensors.

The company, which has handled more than 157 commodities including cotton, barley, bajra, castor seeds, wheat, pulses, maize, spices and aloe vera, also recently moved into the loans business after establishing an agri-financing arm, Kissandhan, 15 months ago.

A non-banking financial company (NBFC), Kissandhan has already impacted about 30,000 farmers to date across India’s major states and crop types, according to a press release. And after issuing Rs2.5 billion in loans since its launch, SLCM is planning to use the proceeds of this funding round to support a 300 percent increase in loan issuances this fiscal year.

“We are pleased to enter the agricultural services sector in India via this investment of growth equity in SLCM,” wrote Ken Vander Weele, co-founder & partner at Creation Investments in a press release. “We are especially impressed with the dedication of the promoter and the innovations that SLCM has brought to this critical sector of the Indian economy. In addition to their significant warehousing and commodity management innovations, SLCM was the first company in this sector to provide financing for its customers via the acquisition of an NBFC and this fits perfectly with our mandate to invest in innovative financial solutions.”

Global expansion is also part of SLCM’s plan and last year it started offering warehouse management and procurement solutions in Myanmar. Other targeted emerging markets include Africa, with plans already in motion to expand into Malawi, the corporate communications spokesperson at Sohan Lal told AgFunderNews.

“We are looking at a growth of over 100 percent at this point, and we have always been positive expanding 90 percent year-over-year since inception,” said Vaishali Sharma.

This is SLCM’s fourth round of private equity funding, which was six months in the making, and Creation Investments was joined by existing investor Everstone Capital, the Singapore-headquartered private equity firm.

Everstone invested in SLCM in 2012 in a Rs1.2 billion round alongside Mayfield Fund, a Californian early stage investment firm, Nexus Venture Partners, an Indian venture capital firm, and the Emerging India Fund of local bank ICICI. Everstone is also invested in Crystal Crop Protection, a pesticide formulations and seeds business headquartered in Delhi.

Indian agri infrastructure has caught the attention of other global private equity players too. High profile names include Singapore’s sovereign wealth fund Temasek which is invested in StarAgri Warehousing and Collateral Management, a similar business to SLCM, including its own NBFC offering agri-financing. And Rabo Equity Advisors, a local private equity firm, is invested in National Collateral Management Services.

Demand for warehousing and financing also coincides with a need to develop the segment’s technology better, and there are a range of startups looking at areas such as solar-powered cold storage for local communities and farm extension services, all designed to improve the journey of food from farm to fork. 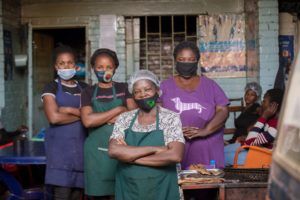