Drones may seem like an agrifoodtech trend of years past, but some companies in the segment have continued to grow thanks to agile business model innovation. For Toronto “drones-as-a-service” firm Deveron UAS, the secret to surviving the post-hype lull is being a good listener.

“As with many young companies, our path has evolved as we learned from our customers.  We have really pivoted to being a more data-centric company for multiple layers of data, as opposed to just drones,” says David MacMillan, co-founder, CEO, and president of Deveron.

“Drones still serve as an important tool in the tool belt – but today they’re just a portion of our focus,” he tells AFN.

The need for drones to add value beyond the initial flash and futurism has pushed the space into more applied contexts, MacMillan says. This includes things like field research, or providing commercial farmers with fungicide recommendations.

“We are learning that farmers will embrace anything that can make them money. So, we focus on selling drone data when it has an application,” he says.

“We still offer a network across Canada and the US for on-demand drone data, and that will continue to grow. But these people will also be able to soil sample, install weather stations, and even collect combine data from their monitor.”

Canadian Securities Exchange-listed Deveron recently raised C$5.79 million ($4.56 million) through a non-brokered private placement. Due to the number of investors who lined up to get a slice of the Deveron pie, the offering was upsized from C$2 million ($1.57 million).

“In September, we started to see a lot of decisions early in the season pay off and discussed the idea of trying to accelerate the growth we were getting.  We had some interest from some new investors, which snowballed with our current investors [who] liked what we were doing,” MacMillan says.

The new funding will be used to help strike partnerships and seek out M&A opportunities in what MacMillan describes as the fragmented agronomy and crop consultant market.

“We saw great success with working with Better Harvest out of Dumas, Texas, and see a huge opportunity in consolidating more of these agronomy partners,” he says.

The capital will also help to boost Deveron’s own digitalization efforts and scale its digital insight solutions for its clients.

Landing on the right value proposition

As with other drone and data analytics companies, Deveron faces the challenge of demonstrating the true value it can deliver to its target consumers. At the height of the drone hype a few years ago, farmers were fond of the imagery that such services could provide, but felt unable to derive actionable insights from the data, MacMillan told AFN back in 2018.

“The digital agriculture space is crowded with a lot of companies that have great ideas, but [they’re] all struggling with a common theme – which is winning trust and getting meaningful distribution,” MacMillan says.

Collaborations partnerships with the likes of Better Harvest — which it acquired last May — have been one way for Deveron to provide its customers with enhanced value.

Around 2015, it started working with Veritas Farm Management, an agronomic data analytics service for farmers in Ontario, to remedy the situation. The goal was to fold Veritas’ team of agronomists, plant scientists, and data scientists into its existing staff to provide specific recommendations and prescriptions for the application of inputs like seeds and fertilizer. It went on to acquire the company in 2018.

Deveron has also taken on the data siloing issue by adopting an agnostic approach, having created integrations with with Bayer‘s Climate Fieldview, John Deere‘s Operations Center, and Pioneer’s Encirca platforms.

However, even when a drone company can find the right partners or lay out a promising value proposition, getting farmers onboard can still be a struggle.

“Our challenges are the same as most precision ag companies: adoption and distribution,” MacMillan says. “We are starting to see [those] pick up with increases in variable rate adoption as well as growing annual soil sampling numbers, but it still only scratches the surface of what it can be.” 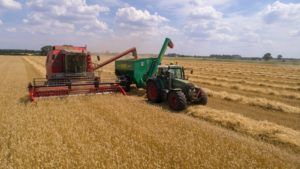