Can Technology Get Slavery Out of Food Supply Chains?

Modern slavery is back at the top of concerned consumers’ minds again after slave auctions in Libya were caught on camera and widely shared last month. Just after the video went viral, The Institute for Agriculture and Trade Policy (IATP) issued a report revealing that Brazil’s rapid agricultural and economic growth has lead to an increase in forced labor or slavery in the country’s meat industry.

The Brazilian government attempted to be transparent about these activities and previously released a list of Brazilian companies known to engage in slave labor, but the Brazil Supreme Court ordered it to stop publishing the list in 2014, with suspicions that corruption influencing this decision. A group of journalists in the country have taken the list on themselves and contributed to the IATP report, which says that Brazil’s cattle ranching sector was responsible for nearly 60% of all slave labor cases recorded from 2003 to 2010 in the country.

Controversial Brazilian meat giant JBS, the world’s largest meat company, has been fined for forcing workers to work 20 hours per day and serving them maggot-filled meat, according to the report. Two-thirds of JBS revenue come from US sales, says Bloomberg.

According to the International Labor Organization, 19 million people are subjected to forced labor and slavery around the globe, yielding some $150 billion in profits for the companies that engage in these illegal slaving operations.

The Global Slavery Index puts the worldwide number of people in “some form of modern slavery” at 45.8 million.

Modern food supply chains are complex and opaque and what transparency exists is largely focused on sustainability and environmental concerns. What’s more, a recent report by the Sustainability Consortium showed that even what large food and agriculture companies know and report about the sustainability of their supply chains is more a theoretical assessment of sustainability metrics, rather than a reflection of the actual agricultural practices used.

Being able to truly see from the top of a major multinational food company down to the field or factory level is much easier said than done, but a handful of new tools are emerging that could change that.

What Do We Know?

What is known about factory and farm level labor practices in food production is often discovered through audits. These are generally in-person visits by a non-governmental organization or other third parties, according to Ros Harvey, founder and managing director of ag sensor and IoT startup The Yield, and formerly founding global director of Better Work, the first cloud-based system for collecting labor audit data, which she founded in 2002 in partnership with the  International Finance Corporation (World Bank Group) and the UN’s International Labour Organisation.

Better Work is focused on the garment industry, which Harvey says is the farthest ahead in terms of awareness and organization around human rights and labor issues.

“Auditing is how this is traditionally being done and there has been technology introduced into auditing to make this more efficient — to make the collecting, analysis, and sharing of data more efficient,” says Harvey.

She says that one of the barriers to wide adoption of such practices is the perception that supply chain compliance is a cost center, rather than a benefit to the business.

“Getting the business case right is incredibly tough. At the moment auditing and compliance are seen as a cost of doing business. I don’t think that’s true. I think there is a very strong business case. Businesses that treat workers well are more profitable and resilient,” says Harvey.

Though the apparel industry also presents a complex and difficult supply chain, Harvey says that the seasonality of agriculture adds even more challenge to getting to the bottom of labor practices at the ground level.

“It is much more difficult to manage labor standard risks with a marginally attached workforce that’s coming and going,” she says.

A few startups are getting into this space of supply chain transparency beyond sustainability.

Justin Oberman, an entrepreneur with a startup operating in stealth mode in this field, sees two problems with the way labor oversight in complex supply chains is most commonly done.

“Most companies have two major pitfalls in this area. They’re relying on third parties to help them understand what is happening in their supply chains. I could also use the term ninth party in some cases. Second, they are relying on people in most cases who are employing or worse, forcefully restricting the workers, instead of engaging with the workers directly,” says Oberman.

His new venture will use SMS messages to connect and gather information about working conditions, and anything else the client might want to learn, at every point of the supply chain. His potential customers are major multinational food and apparel companies.

What Oberman doesn’t do is make recommendations. “I’m not trying to tell anyone how to run their business. I want to give them info that they wouldn’t otherwise have.” His company can, however, create strategies to customize the information that he can collect, through SMS surveys and polls, for example, in the hopes of making supply chain compliance data both accurate in terms of preventing abusive labor practices, but also more valuable and useful to the client.

Working from the other end of the supply chain, IndentiGEN, an Irish supply chain traceability company, uses a proprietary process to determine the origin of meat, fish, or shrimp down to the individual animal. In April, the company entered a partnership with UK seafood importer SeaFresh and retailer Mark’s and Spencer, to verify that all the shrimp for sale at the retailer is farmed ethically.

“With its complex and global supply chain, the shrimp industry has been subject to high profile controversy in recent years for poor quality, excessive use of antibiotics and reports of human trafficking, slave and child labor,” said IdentiGEN co-founder Ronan Loftus in a statement.

Since shrimp give birth to hundreds of thousands of offspring, IdentiGEN can collect DNA samples from relatively few shrimp mothers to have a picture of nearly every farmed shrimp in a certain supply chain, even after cooking. This type of verification can prove exactly where a shrimp came from, but of course, the assurances of labor practices are only as good as the available data and transparency of those farms.

There is actually one current example of a multinational agribusiness taking on top to bottom supply chain communication. In July, Olam International a large, global agribusiness operating across continents and agricultural commodities, announced that it had developed the Olam Farmer Information System (OFIS) – a technology platform aiming to provide smallholder farmers with a variety of resources to help sustain and grow their operations, as well as give Olam the information it needs to assure its customers about the provenance of their products and how they are produced.

“OFIS solves the information issue by providing a revolutionary tech innovation for collecting and analyzing first mile data,” Simon Brayn-Smith, the director of OFIS, told AgFunderNews in July.  “We are able to register thousands of smallholders, GPS map their farms and local infrastructure, collect all types of farm gate level data such as the age of trees, and record every training intervention.”

There’s also an SMS function that allows users to contact one another directly with tips about pricing, weather, and production.

“The platform allows for greater insight to tackle issues from poor yields to climate change and child labor,” he explained. “And by geotagging each bag of produce, we can trace it through the supply chain,” explained Brayn-Smith.

Oberman told AgFunderNews in July that Olam’s tool offered encouragement that there is a space for his company, which also uses mobile technology to connect with producers.

But even if these startups can facilitate more communication and transparency throughout food supply chains, both Oberman and Harvey emphasized that technology alone cannot change the abusive practices, cultures of fear, or many other conditions that contribute to the continued occurrence of forced labor.

“Auditing is very important because it gives you a sense of what is really going on, but fundamentally it does not deal with the root cause. It lets you see symptoms, not the cause, which is based in power difference and lack of genuine social dialogue between workers and management,” says Harvey.

Also, in order to help at all, new technology needs to be put in place and used, which Oberman says can only come from the very top of the supply chain.

Can your technology help eradicate slavery in the food supply chain? Let us know! emma.cosgrove@agfunder.com 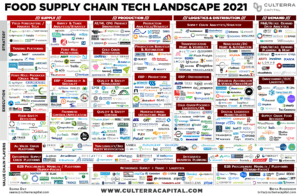