Benson Hill Biosystems (BHB), the plant biology, big data analytics and cloud computing startup, has raised $25 million in an oversubscribed Series B round of funding.

An agribusiness also invested but did not want to be named. It is not one of the ‘Big 6.’

BHB started out life as a crop trait development firm focused on discovering traits that would improve photosynthesis, and therefore yield in crops, and the startup built a cognitive engine to help guide that discovery by predicting outcomes in crops from certain traits.

Last year BHB opened up CropOS — this computational platform that’s driven by data and machine learning — to others in the industry to develop traits together. But it continued trialing the internal product pipeline, and now has two years of successful field trials showing double-digit yield increases in corn, according to Matt Crisp, CEO of BHB.

“None of that original product development pipeline discontinued, and in fact, the results of those trials beat our expectations,” he said.

The CropOS platform is selecting trait leads with a hit rate of 10%, he added. In other words, it is successfully predicting the biological outcomes of certain traits in crops in 10% of cases, which Crisp says compares to just 1% historically.

“I’ve never seen a computational platform that had prediction quality this high, and it’s all about quality over quantity,” he said. “We’re not a really large company so we can’t throw tremendous amounts of resources on screening thousands of genes. But if we put only a couple hundred through the system, we can now have a portfolio of viable candidates that are more than double what expected to have at this time a year and a half ago.”

Perhaps even more excitingly for some, BHB has brought a new tool out of stealth: CRISPR 2.0. BHB has identified what Crisp believes is a more precise and efficient gene-editing tool than CRISPR Cas-9. CRISPR 2.0 uses a suite of newly validated nucleases instead of the Cas-9 enzyme.

“We were a little reticent to engage with CRISPR Cas-9 as we didn’t know who to license it from and as a small company we can’t afford not to know if we have the freedom to operate or not, so we started creating our own system. We initiated it on a whim really but then it progressed in a way that exceeded our expectations, and we’ve already established licenses with Cornell, NC State, and Washington State,” said Crisp.

BHB plans to talk further publicly about this expansion of its technology portfolio and how other innovators will be able to access CRISPR 2.0. Crisp told AgFunderNews that he plans to roll it out on the platform in a similar way to CropOS.

“We believe this tech needs to be made available to the industry and not that one company should own and covet it,” he added.

If that’s not enough, BHB has added another string to its bow with a cloud-based application for breeders to upload their information and receive real-time machine learning-based decision support. Dubbed “Breed” the platform uses data and analytics from CropOS to guide breeders to make the crosses they want for certain crop traits.

BHB is technology agnostic and has partners using CropOS for GMO, non-GMO, gene-editing and so on. “Our focus is on identifying targets that improve crops, and no one has a crystal ball to understand what will and won’t be regulated in the future.”

BHB now has 55 team members after more than doubling since its $7.3 million Series A in 2015. It anticipates hiring another 10 or so over the next year and a half, but that’s not urgent, according to Crisp who says the company has a critical mass staff-wise to execute plans for the next two years. With the proceeds, the company will continue doing crop trials and product development, as well as continuing to build out the computational platform by scaling the data and analytics.

Despite being oversubscribed in the end, Crisp said fundraising always takes longer than expected and the whole process was six months from start to finish. That compared to two years it took to raise the Series A.

“We were raising our Series A at a time when investing in anything to do with biology was very unpopular, so we were treading water for two years to get it done and fortunately we had seed investors that stood behind us,” he said. “Now we have demonstrated the technology and hit our milestones, we had an easier time with the B and were fortunate to raise a sizeable round with a great group of investors.” 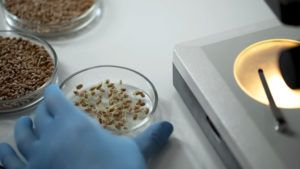