Edible Manhattan and VaynerLive hosted the first ever Food Loves Tech Expo in New York last month to showcase technologies aiming to disrupt our food chain. A number of talks were given throughout the weekend, tied in with numerous exhibits, experiential installations, and food sampling workshops.

I attended a talk between Alexander Lorestani, CEO and co-founder of Gelzen, a startup making animal-free gelatin, and Daan Luining, a research strategist at New Harvest, the non-profit research institute specializing in advances in cellular agriculture.

Cellular agriculture is a method of food production enabling the growth of meat, eggs, and leather in cell culture rather than raising and slaughtering livestock.

Lorestani and Luining explained the challenges that they face in this sector, which are principally tied to a lack of funding and managing the consumer fear factor.

Seen from the outside, especially by those who have nothing to do with ag or food tech, this can feel a little too much like the experiments of mad scientists. The way that GM crops have been demonized adds to this fear of any type of food product that is not deemed to be “normal” or “natural.” It is for this very reason that Gelzen started by working on gelatin, as it is such a well-known and commonly used product and certainly doesn’t fit into the “all natural” category!

New Harvest is working to strategically provide funding to researchers all over the world and is also currently working with three universities.

One of the material challenges Luining highlighted was being able to obtain a product that has the exact qualities of the original while remaining cost competitive with the companies they are looking to replace. The first-ever cultured burger cost a whopping $330k to make!

This is slowly getting easier as costs go down on the tools and materials required. Lorestani was unable to share how long it would take for them to be on an equal footing price-wise with their competitors, but he’s positive that companies using Gelzen gelatin will be able to draw a broader audience to their products, including vegans.

Beyond attracting everyday consumers, it seems that unless these companies can convince the bigger distributors, be they supermarkets or restaurants, that there is value to be found in their products, regarding pricing, taste, quality and environmental protection, then they will not be able to progress as they hope to do.

2. Vertical Farming and Aquaponic Farming are Here to Stay

Two East Coast vertical farms were present throughout the weekend at Food Loves Tech: AeroFarms and Edenworks. Both are expanding massively over the coming year, as demand increases from the supermarkets and chefs that they provide produce for.

What they produce is mind-blowingly full of taste, and delivered for purchase a lot fresher than their Californian counterparts. Currently, most greens come from California, but can spend up to a week in transit before reaching East Coast consumers.

This industrialization of farming means that yields are higher, and the process could become more cost-effective, with 95% less water being used thanks to targeted watering. Edenworks is combining this model with aquaponic farming and using fish waste, more specifically from tilapia, as fertilizer. The fish is then also sold on to consumers.

These two companies are a small part of a slowly booming industry, primarily on the East Coast and in the Midwest, which suffer harsher winters and therefore rely on Californian production. These modern day farms cut out the need for traditional, sun-drenched farms and allow production to continue year round, and give consumers the fresh, local food they’re demanding.

3. So Many Early Stage Inventions at Food Loves Tech; So Few That Can Go the Distance

I was amazed at the number of different food technology inventions being exposed at Food Loves Tech, but also noted how young many of them were; some hadn’t yet launched, and others were just a few weeks old.

I noticed a particular concentration of products aimed at demystifying food, but also trying to engage consumers with what they are eating and them involved in the process too.

This ranged from 3D food printing to cocktail making machines.

On the more practical side, I saw an intelligent oven that detects what you are cooking and monitors cooking accordingly, and an induction burner that allows you to do everything from cooking sous vide to brewing your own beer or making yogurt.

On the lifestyle front, there was a portable gluten detection sensor that will be expanding to include peanuts and milk in 2017, a smart water bottle that’s able to adapt your hydration needs based on your vitals, and biodegradable and edible cups, amongst others.

Another common trend at Food Loves Tech was in the “do-it-yourself” kits being sold, such as indoor gardening tools or cricket farms. While a very noble idea, indoor ecosystems and cricket farms simply cannot provide enough produce to feed a family, and replace weekly trips to the supermarket. They’re also largely uneconomical and take up too much space for space-poor consumers living in cities.

Overall, most of the startups and inventions that were presented were fun to see but with perhaps limited usefulness long-term. The price point of many rules out mass consumerism, and I remain unconvinced that people will be looking to 3D print food every day at home. The novelty factor can only take you so far. 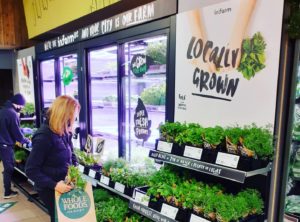