EXCLUSIVE: VanderSat and Swiss Re Partner to Bring Crop Insurance to Untapped Markets

In another sign of the growing link between agtech and insurance, Dutch remote sensing startup VanderSat has partnered with Swiss Re, the world’s second-largest reinsurer, to create new insurance products fueled by the startup’s unique dataset and capabilities.

VanderSat came out of stealth with a satellite data analysis service for the agriculture sector in January after receiving €1.34 million ($1.6m) in grant funding from the European Commission late last year. The company is taking a different approach to other remote sensing outfits working in agriculture, in its use of microwave sensors and data instead of imagery to glean insights about and for the industry. By collecting data from a range of different satellites operated by organizations across the globe, VanderSat measures soil moisture and soil temperature on a daily basis and has now built up a database going back 16 years.

Using these microwave data, VanderSat is able to alleviate one of the main pain points associated with satellite-derived imagery data, cloud cover, as well as facilitate the underwriting of hard-to-insure problems for farmers, such as drought.

“In many countries, agri insurance is an immature line of business, with little historical data on crop losses that can be used to correctly design and price insurance products. As such, we often work with proxy indicators for crop losses, mainly weather and crop health index data [from existing remote sensing services],” said Hans Feyen, head of agriculture reinsurance for Europe, the Middle East, North America and Innovation at Swiss Re.

The global reinsurer has been using remote sensing data for around seven years, but Feyen said that VanderSat’s capability allows the firm to create new parametric insurance products (meaning that a payout need not be triggered by a 100% crop loss) that give a payout to the farmers in the case of predefined levels of drought.

Worldwide there are seven billion hectares of arable land and just one billion are insured, in part because to date it has been too difficult to determine a payout and to define an abnormal natural occurrence, especially in the areas where drought is common. In order to determine what kinds of conditions are abnormal and should be covered by insurance, insurers and reinsurers first need to know what is normal.

In developed markets where weather and farm data is readily available, this is an easier task. But in developing markets, data is scarce and there is no baseline on top of which to determine risk and write insurance policies.  Through this partnership, Swiss Re seeks to change those dynamics, with the hope of increasing the insurability of farming regions currently untouched by crop insurance.

Swiss Re has estimated that the protection gap for weather-related catastrophic events was $78 billion on average annually over the past 10 years, and $160 billion in 2017 alone – the highest level on record, which Moody’s says offers insurers and reinsurers a big opportunity to make climate change-related products.

“In crop insurance, actuaries deal with the measurement and management of risk and uncertainty. If they do their actuary work they can calculate how often a hit can be expected. When you have two or three years of data the options to build an insurance product are rather limited. Long and consistent time series are really important,” said Robbert Mica, cofounder, and head of business development for VanderSat.

VanderSat is largely funded by its founders to-date, excluding around €1 million ($1.2 million) in investment from CEO Menno van der Marel before he joined the company last year, and with revenues set to increase 200% this year, the company is unsure whether further fundraising will be necessary.

Swiss Re has a team of five specifically dedicated to seeking out new agricultural innovations and they have been working with VanderSat for over a year to validate its technology and efficacy in making insurance products more precise, and more profitable.

“We worked together for a full year to validate the way we get our data and not in a couple of small fields, but on millions of hectares all over the world to find out if our solution really makes sense in the insurance field,” said van der Marel. “We found out during the cooperation that there is a very good correlation between our data and crop yield, so there is a huge opportunity,” he continued.

Back in January, VanderSat told AgFunderNews that targeting large institutions, organizations, and governments was part of the company’s strategy – a tack that allows VanderSat to focus on its strengths in data gathering, processing, and analysis while leaving the end-user connections to its partners.

van der Marel added that the partnership could be advantageous to all involved, including farmers. “We’re adding positive value in the whole value chain because then the farmer has cheaper insurance and the insurance company and Swiss Re have a reasonable margin, and we can deliver the soil moisture data service.”

opti-crop can be used by both insurers and farmers to track crop health and weather among other factors, fueled by publicly available satellite data, weather station data, universities and private companies like VanderSat. Swiss Re is also white-labeling the platform for its insurance clients (meaning opti-crop will be rebranded by clients of Swiss Re to offer to their customers).

“Through this platform, we aim to provide more info to selected clients, like soil moisture,” said Feyen. “The data service is fully operational and near real time. As such, it is possible to warn farmers when a drought builds up, giving them a chance to react,” Feyen explained to AgFunderNews.

This is not the first link between insurance and agtech and likely won’t be the last. In February, farm management and agronomy software platform Farmers Edge announced a four-year deal with major global reinsurer PartnerRe, to bring customized insurance products to its users. An important distinction here is that in order to take advantage of the partnership, growers must be Farmers Edge users. The Swiss Re-VanderSat partnership requires no such commitment and offers yet another model in the growing and varied universe of agtech startups’ relationships to the financial side of farming. 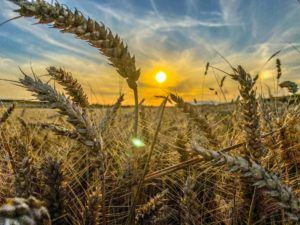