Series A rounds for upstream agrifoodtech technologies — those operating close to the farm and in the midstream — amassed $1.9 billion in the first half of 2021. That was more than the $1.3 billion invested at Series A stage for downstream innovations operating closer to the consumer. This strength in early-stage funding, which was also reflected at the seed stages, suggests that investors see the long-term potential for tools and business models that sit earlier in the agrifood value chain, usually on the farm or in the lab.

Last year, investment in the upstream segment as a whole outpaced downstream technologies for the first time since 2013. As AFN deputy editor Jack Ellis recently noted, “ . . . with the pandemic shining a light on the need for a technological update to many upstream categories, investors moved in.”

That interest has continued through 2021, despite an overall rebound for downstream technologies. Of particular note is that there appears to be a growing interest for upstream tech at earlier stages, most notably at Series A. In fact, Series A investment across the value chain increased 131% compared to the first half of 2020 showing signs of a return to more risk-based investment after the notable flight to safety — and therefore later stages — during 2020. As noted above, upstream business models and technologies sit earlier in the agrifood value chain, and typically focus on areas like agriculture, food production, and the supply chain.

AgFunder uses a number of self-defined categories in its research reports, grouped into upstream and downstream (ie, consumer-facing) categories. AgFunder’s upstream categories include:

GOOD Meat, the division of Eat Just developing cultured meat, grabbed the biggest upstream Series A round in H1, thanks to its $170 million raise in May 2021. Weather data and forecasting platform Climavision took second place, with its $100 million deal in June, followed by farm-to-factory cold chain platform Xianshenghuo‘s $93 million in February.

Innovative Food startups, particularly those enabling new forms of alternative protein, appear to be driving the uptick in Series A investment. These foods are largely still confined to the lab as companies continue making prototypes or running small pilots. 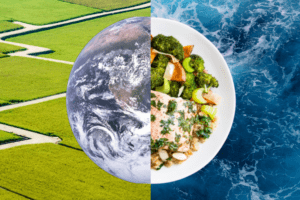 Addressing the ‘cow in the room’: Applications open for 2022 GROW Impact Accelerator