Since launching in 2015, Agrofy has signed up 5,000 companies, including multinational ag players, that have listed more than 65,000 products. Agrofy cofounder and president Alejandro Larosa told AgFunderNews the peer-to-peer and second-hand marketplaces for farm vehicles have been particularly popular.

The company’s new funding will be used to build out the site’s capabilities and broaden the product supply.

Larosa and cofounder Maximiliano Landrein have experience in agtech startups going back to 1999, when they founded FYO.com — originally intending to build an online ag retailer, now a grain marketplace for Latin America. The timing was off for an e-commerce play, admits Larosa, but the team sold a majority stake in the business to Cresud, now an investor in Agrofy.

“In Brazil, there was a leapfrog where many people who were not into e-commerce went straight to mobile commerce,” which has brought transactions online quickly, Jardim explained.

Agribusiness marketplaces, for better or worse, draw comparisons to the well-funded and highly disruptive Farmers Business Network, which emphasizes price transparency and seeks to upset some of the more controversial practices of ag input suppliers and ag retailers.

Larosa says that indeed, large corporate partners needed some reassurance before agreeing to work with Agrofy.

“At the beginning, they were afraid because they thought that maybe e-commerce was a threat for them, but we always explain that our business model is to help them use the internet and digital tools,” he said. “We don’t want to destroy their business. We want to help them to adopt e-commerce strategies.”

Simply bringing ag retail online is disruptive in and of itself, especially in emerging markets, and Agrofy intends to work with ag suppliers to create a platform that works for them.

“We are not going to force companies to do anything that is against their business strategy. If a company wants to publish their prices they can, if they just want to give pricing privately, they can,” said Larosa.

Jardim added that this cooperative ethos is part of what brought corporate VCs into the round. “What the strategics saw in Agrofy was that this business model was being very friendly to the big corporates and it reduced the friction,” he said.

“Syngenta Ventures has been following this space closely for the past several years. Our team feels that the community of growers is ready to embrace using the internet for agribusiness transactions just as they have become comfortable with consumer goods and banking internet platforms,” said Pierson, who added that Syngenta has reviewed startups in this category in the US, the EU and Latin America. Ultimately the decision to invest in Agrofy came down to the team, and Agrofy’s relationship with corporate players like Syngenta.

“Agrofy has a management team that has succeeded in this space with a prior startup, has a demonstrated expertise in agribusiness and a keen understanding for how the channel works,” Pierson said. “It was easy to get excited about this deal.”

One factor that could bring uncertainty to the future of e-commerce in Latin America is the growing influence of China in the region. Chinese investors and tech players have recently shown greater interest in Brazil and Latin America more broadly, according to Venture Pulse Report. For example, e-commerce giant Alibaba recently announced a program to work with Mexican companies on logistics and payment best practices.

“Clearly the internet is a space for which the competitive landscape can change quickly.  Agrofy will have to remain nimble to keep the initiative in the market. They have good momentum and are well capitalized,” Pierson said.

He added: “It’ll take more than money to successfully enter the market from out-of-region. Syngenta Ventures thinks the e-marketplace companies will initially be regional plays because agribusiness is so local in nature.”

Jardim agreed, noting that in addition to regional know-how, subject-matter expertise is important to win in agriculture e-commerce.

Agrofy’s round is the first investment for SP Ventures outside of its home country of Brazil. “For us it’s a big step and what made us comfort was the seniority of the team,” said Jardim, who added that this transaction, along with Brazilian digital ag company Solinftec’s recent funding led by TPG ART, are “the most relevant deals in Latin American agtech history,” both due to their size and the players involved.

Agrofy had raised a total of $4 million before this round, bringing the total to $10 million. Added Jardim, “When they go to the Series B there is going to be a lot of competition from existing investors.” 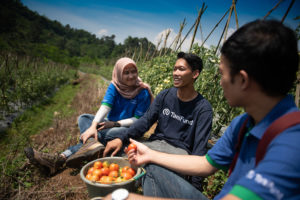