Look — up in the sky! It’s a bird. It’s a plane. It’s…a drone monitoring your farmland?

Despite current regulations keeping drones grounded — the Federal Aviation Administration strictly prohibits commercial drone use in U.S. airspace unless an exemption has been granted — venture capitalists clearly saw a promising future in pilotless aerial technology during 2014. Spanning 19 financings over 18 startups, a total of $86 million was pumped into the burgeoning field last year.

Drones have stirred up buzz across a slew of industries recently, but it’s no secret that the market is expected to hover closely around agriculture over the next decade. According to a report by the Association for Unmanned Vehicle Systems International, commercial drone integration could drive over $82 billion into the U.S. economy by 2025, and more than 92 percent of that figure is predicted to come straight from Ag. Technology that once seemed eternally stuck in the science fiction realm could play a major role in the food production process — that is, if the U.S. lawfully welcomes drones into its long-restricted airspace.

In line with growing interest in the field, the FAA finally released a proposal for revised commercial drone rules on February 15. Under these new regulations, the nation will open its skies to drones, but not without restrictions — drones must remain visible to the licensed operator, must not exceed 500 feet, and cannot be flown over people “not directly involved in operation.” (This is not great news for Amazon, which hopes to one day incorporate a UAVs network into its delivery service.) While it’s hard to estimate when these new rules will take effect — some reports say 2017 at the very earliest — and if any further modifications will be made before that time, the proposal draft is the first step in allowing drone technology to reach new heights.

Recalcitrant laws haven’t prevented drone companies from perfecting their products, and investor interest appears to be at an all time high. Big-name investors poured dollars into UAV startups — the oldest of which was founded in 2009 — in an effort to capitalize on a space that is still largely theoretical. Airware led the pack with a $25 million Series B funded by Kleiner Perkins Caufield & Byers, Andreesson Horowitz, and First Round last June. In May, Skycatch attracted the attention of Google Ventures, which contributed to a $13.2 million Series A. PrecisionHawk swept up a $10 million in a Series B round led by Intel Capital in late September. Last fall, business mogul Richard Branson invested an undisclosed amount into 3D Robotics after being “blown away by 3D Robotics’ technological capabilities, disruptive vision, and extensive professional community.”

“I’m really excited about the potential 3DR sees in drones,” Branson said in a press release. “They can do a lot of good in the world, and I hope this affordable technology will give many more people the chance to see our beautiful planet from such a powerful perspective.”

Drone development isn’t just about hardware. Flying machines destined for the farm will come equipped like precision Ag Swiss Army knives, with cloud-based data collection systems, software platforms, remote sensors, and HD cameras designed to help farmers survey their fields. Drones are even being developed to apply just the right amount of fertilizer and water to crops on an as-needed basis.

The idea is that by using drone technology, farmers can have a better understanding of their land, and thus, make decisions that reduce excess inputs, maximize crop yields, and save money.

“Commercial drones are creating a revolution in insights and countless industries around the world will soon benefit from access to aerial information that, until now, has been too difficult, dangerous, expensive or downright impossible to get,” said Airware CEO Jonathan Downey. 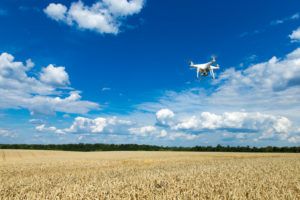